Investment-grade apartments have under-performed. So, is now the time to buy?

In Melbourne, investment-grade apartments have not appreciated in value very much in the past three to five years when compared to houses – as illustrated by the chart below. I would like to explore why this might have been the case and share my opinion of whether this performance differential will persist.

What are investment-grade apartments?

Over the past 5 to 10 years there has been a significant amount of newbuild apartments released onto the market. Construction activity peaked in 2015 with approximately 20,000 p.a. apartments being constructed. It is predicted to shrink to one third of this volume by 2022.

As you can imagine, developers have a significant marketing budget to promote these new properties. In addition, newbuild apartments certainly appeal to the uneducated investor or homebuyer – because they’re shiny and new and have all the mod cons (I have written about why they don’t make good investments here). Older-style, investment-grade apartments struggle to match the marketing power of these newbuild properties. Therefore, as you can imagine, most of the money that is gone into purchasing apartments in last five years has been directed to newbuild apartments, not existing, older-style apartments.

Markets nearly always revert to their long-term mean. That is, if the market goes through a period of subdued growth, this period is typically followed by a period of very strong growth until the average growth over the whole period is in line with the long-term average (mean). This is exactly what happened in Sydney as depicted in the chart below. The Sydney market did very little between 2004 and 2012 but made up for it between 2012 and 2017. 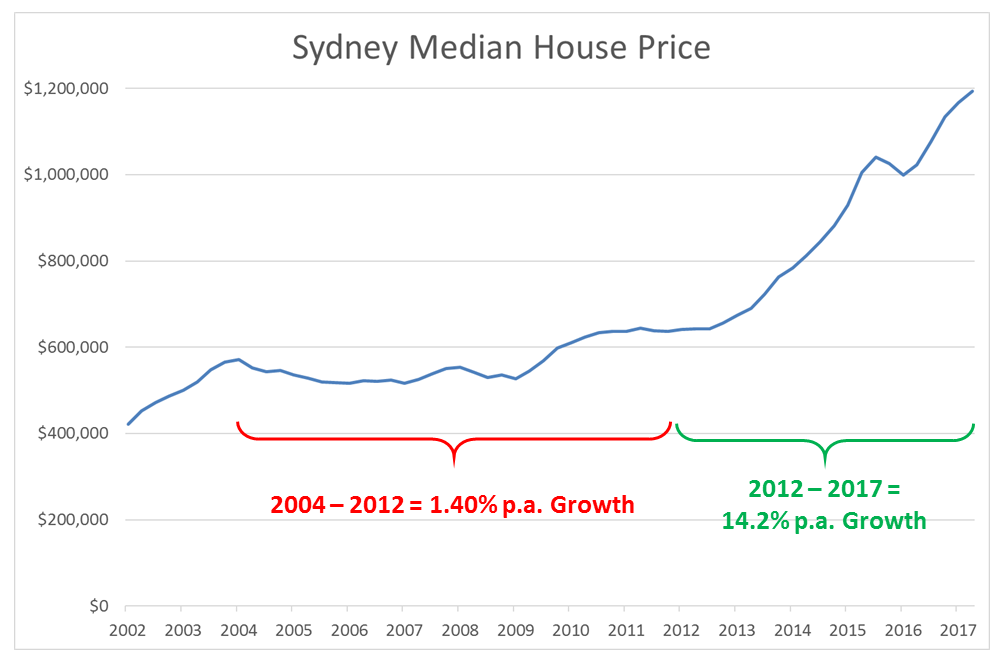 Therefore, since the investment-grade apartment market in Melbourne has underperformed over the last five years, it is reasonable to expect that at some time in the future the market will make up for this subdued growth.

Another important consideration is the performance of houses recently. Five years ago, you could purchase investment-grade house with a budget of around $900,000. Today, in the same suburbs, you will need a budget in excess of $1.2-1.3 million. Therefore, more property buyers are being priced out of the housing market and as a result, will be forced to purchase an apartment. As such, I expect the demand for apartments to appreciate in the coming years.

And then there’s the Melbourne population growth projections to consider which I have written about previously. Melbourne is projected to be bigger than Sydney by 2050.

If you have purchased investment-grade apartment in Melbourne over the last five years I appreciate that the performance probably has been less than desirable. That said, I remind you that you probably didn’t purchase the property to build wealth within a short five-year period. Instead, it is more likely that you invested in said apartment to build wealth over the long run i.e. 10, 20 or more years. Therefore, the best advice I can give is to have the conviction and discipline to hold on. Of course, growth in property markets is almost never uniform and straight-line. Instead, it’s more reasonable to expect variability. It would be nice if you enjoyed some growth in the first few years of owning it, however that is not always possible.

Should you buy an apartment now?

Whilst I caution anyone in trying to predict what investment markets will do in the short term (because it is inherently difficult/impossible), I think it would be difficult to argue that the apartment market doesn’t have more upside than the housing market (investment-grade property only). Of course, I could be wrong, and houses could continue to grow faster than apartments. That said, at some point apartments must catch up as the gap between apartment and house prices will not widen forever.

If you have purchased an investment grade apartment in Melbourne in the last five years and you haven’t enjoyed any capital growth, don’t be alarmed. This is a market wide phenomenon not an asset specific issue. Remind yourself that you invested for long-term and that any change in value in the first five years isn’t relevant in the long run.

If you have any other concerns about the performance of your investments, property or otherwise, do not hesitate to reach out to us.

The pursuit of ‘quality’ advice

The pursuit of ‘quality’ advice