Borrowing capacity has increased – but by how much?

The banks are starting to push back on regulators

Until now, the banks have remained relatively silent about the government’s crackdown on lending standards which has resulted in a severe reduction in borrowing capacity. Of course, they have wanted to stay out of the limelight given recent bad press from the Royal Commission. However, they have now found their voice and have said the level of tightening is impractical, anti-competitive and potentially damaging to the economy.

ASIC will hold public hearings in in August as part of its public consultation process. The banks will have an opportunity to voice their concerns in a more public arena.

How banks assess your borrowing capacity

The banks will typically make a number of adjustments to assess your ability to service debt. Whilst all lenders have different rules, the below formula summaries the banks typical approach.

The table is a generalisation. Due to differences in policies and your situation, each lender might apply slightly different methods.

The impact of the recent benchmark interest rate reduction

ANZ’s borrowing capacity has increase by 20% whereas Westpac’s only increases by 8% because it made some changes to minimum living expenses – they give with one hand and take with the other. It is interesting to note that ANZ and nab’s borrowing capacity vary by almost 17%! This demonstrates that it’s important to compare a number of lenders.

Please don’t conclude from the above analysis that ANZ’s borrowing capacity will always be higher than nab’s. There are so many idiosyncrasies with each bank’s policies and as well as differences in individual client circumstances that can change which lender offers the highest borrowing capacity.

Living expenses are the real problem

The more debt you have, the greater the impact the benchmark interest rate will have on your borrowing capacity. However, for most people, the treatment of living expenses is the main thing destroying borrowing capacity at the moment.

The problem is the banks do not treat discretionary and non-discretionary expenditure differently. Therefore, if you eat out every week and spend $200 per meal, it is assumed that your ongoing annual commitment is $10,000. And that alone reduces your borrowing capacity by approximately $130,000.

But of course, that is nonsensical. If you experienced cash flow pressure, of course you would eat out less often (or maybe not at all). Therefore, maybe the banks should only include a portion of a borrower’s discretionary expenses e.g. say 50% – to make allowance for the fact that you do have the discretion to reduce them in order to meet your financial commitments. Eating out is not a financial commitment!

Will this loosening in credit policy stimulate property price growth?

The diagram below (click to enlarge) charts the monthly volume of total new housing finance commitments (excluding refinances) from 2002, when the data set began, and 2019. I have adjusted the amounts for the impact of inflation. I have compared that to the annualised change in median house values over a rolling 3-year period (for Melbourne, Sydney, Brisbane and Perth).

It is important to observe that credit flows have been relatively volatile – ranging from $15 billion and $25 billion per month over the period. 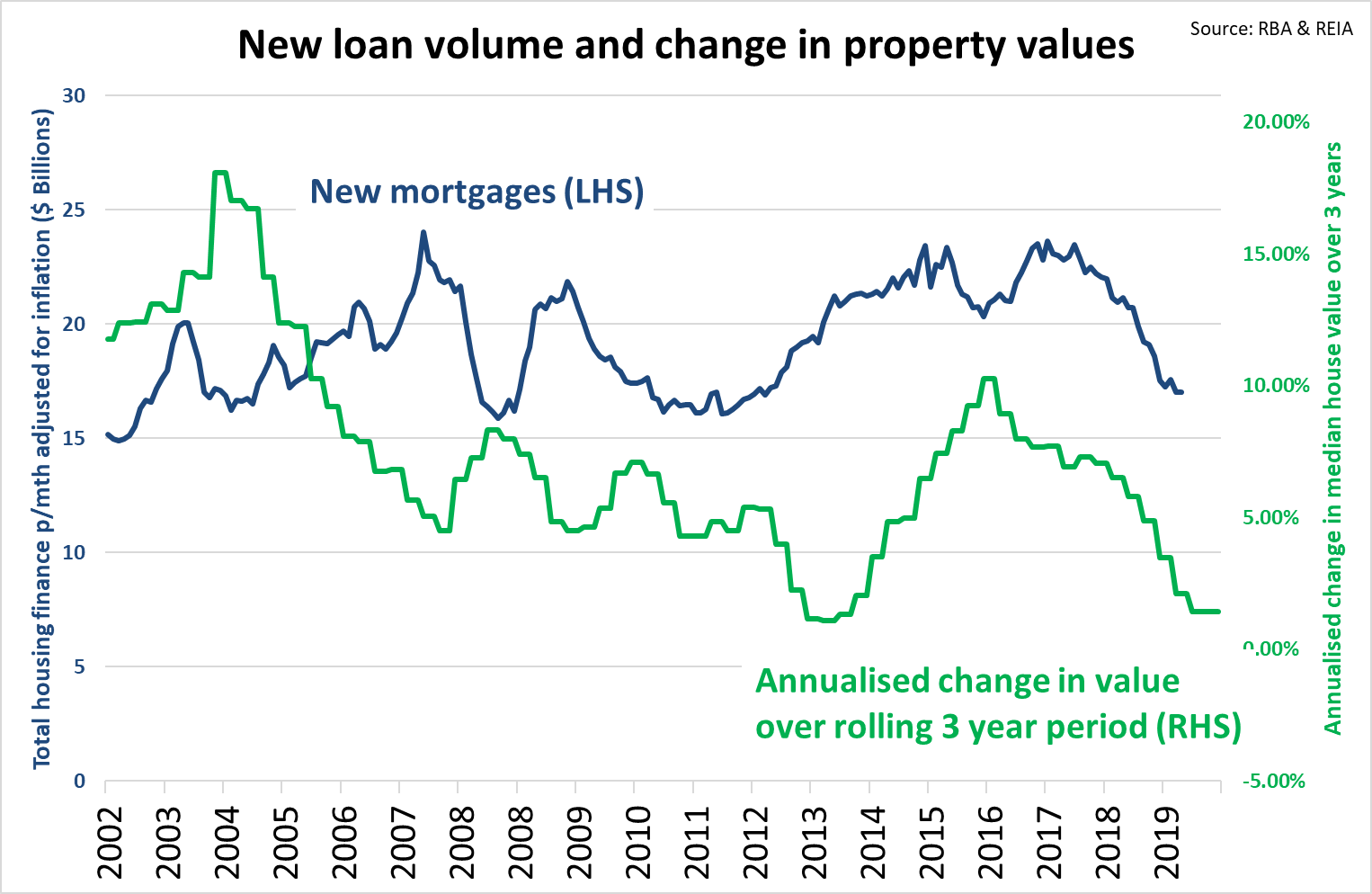 There doesn’t appear to be a perfect correlation between credit flows and property prices (except for maybe the past 5 years). For example, you will notice that credit volumes fell by 21% between September 2009 and March 2012. Over this period, the Australian median house growth rate was only 3.3% per annum according to the REIA – although Melbourne and Sydney did better with growth of 4.7% per annum. This period of growth was still well below trend, but not as bad as the last few years.

In any case, it is reasonable to conclude the credit flows do have a significant impact on property price growth and the recent easing of credit should contribute to the property market’s recovery.

Are auction clearance rates really a good indicator that the market is recovering?

The media have cited an improvement in auction clearance rates as an indication that the property market is recovering. Clearance rates at the start of the year were close to 50% in Melbourne and Sydney. More recently, they have increased to around 70%. However, there are very few transactions. In terms of property numbers, new listings are down by around 30% over the past 12 months. In terms of the value of property sold, only $138 million of property changed hands  last weekend – well below a peak market volume of $1 billion.

Therefore, I do not place a lot of weight on the improvement in clearance rates, although it is a positive signal. It is very difficult to get a true sense of the market with such low volumes. The spring market should be a good test.

Reminder that markets can change quickly

One thing you must be mindful of is that the market can change quickly. Prices can jump significantly from one weekend to the next and it is difficult to ascertain whether the move is permanent or not. If the price movements are permanent and you don’t quickly change your expectations accordingly, it could cost you a lot more in the long run. This is where it is important to have an experienced and reputable buyers’ agent advising you. A lot of money is at stake and it’s too risky to try and do it all yourself. Your lack of experience may end up costing you more than what a buyers’ agent will charge.

If you have any questions about your borrowing capacity, please do not hesitate to reach out to our Associate Director, Jodi McKeown directly (email here).