The Australian and US share markets reached all-time highs at the end of last week. This is great news for superannuation returns and existing share investors. However, where will the markets go from here?

When valuations are high, future returns will be low

There is a strong negative correlation between the starting valuation multiple (e.g. price-earnings ratio) and an investor’s subsequent 10-year investment returns. That is, if current valuations are high, future returns are likely to be low. This makes sense because if you invest in a company or market that is currently fully valued, there isn’t a lot of upside left. In fact, it could be that you are overpaying to invest in that company or market. If that is the case, you could experience capital deprecation.

The US market valuations appear elevated

The CAPE ratio is a widely accepted measure of a market’s current valuation relative to history. Currently, the US market’s CAPE ratio is over 30. The long-term average is in the range of 18 to 22, depending on the period and adjustments made. The US CAPE ratio has only been above 30 two times since 1871:

Am I saying that the US market will crash? No. In fact, the CAPE ratio is not a reliable indicator of short-term market movements, only long-term (10 year) returns. But this analysis does indicate that US market valuations are alleviated and as such, history tells us that future returns will likely be lower.

What about Australia and rest of the world?

Australia’s CAPE ratio is currently 18.4 which is above its median at 16.5. Fair value is considered to be 17.1. So, whilst the Australian market appears to be slightly overvalued, the differential isn’t as much as the US and other markets. It is important to note that most developed markets appear elevated at the moment – except for the UK and Europe.

There are some headwinds to consider

There are a few headwinds that might impact future equity market returns including:

What has driven past growth in the US?

The large tech companies are responsible for driving a lot of share market returns in the US over the past decade. As illustrated below, the aggregate value of the FANMAG (Facebook, Apple, Netflix, Microsoft, Amazon, & Google) companies is now circa $US3.4 trillion. Except for the US and Japan, that is more than the entire value of other developed country share markets! Some of these tech companies are trading at very lofty valuations e.g. Netflix’s PE is 139 and Amazon is 82! Tech company valuations are rarely underpinned by fundamentals. For example, Uber’s current market value is $US83 billion – that is similar to BHP’s value – except that BHP makes over $AUD10 billion profit per year whereas Uber doesn’t many any profit!

The answer: focus on quality

The table below sets out the expected components of overall expected future investment returns in the next 10 years. As noted, the drag created by currently high valuations may have a significant impact on returns – particularly in the US.

*There’s a 90% probability that future 10-year returns will be within the range.
Source: Research Affiliates

The best way to mitigate this is to use a value investing approach. Economist, Ben Graham is regarded as the father of value investing and taught Warren Buffett at university. Buffett practices much of what he learnt from Ben Graham.

The core tenant of value investing is to invest in companies and markets that look cheap relative to your assessment of intrinsic value. For example, a value investor wouldn’t invest (or would significantly reduce their investment) in stocks such as Amazon, Netflix and Uber.

The chart below (courtesy of Schroders) compares the performance of value versus growth strategies between 1936 and 2018. It shows the value has under-performed for the past 6 years. For example, I regard Roger Montgomery as Australia’s best active fund manager (even though I’m an active fund management non-believer) and his firm has under-performed over the past 5 years too! 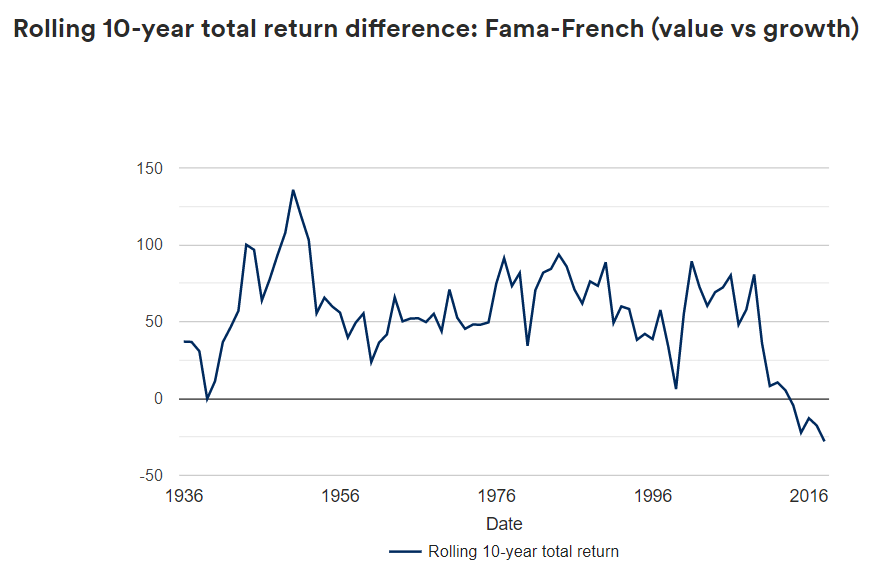 Uber (and lots of tech companies) is a good example of why value investing has under-performed. The market hasn’t rewarded companies based on fundamentals. As Buffett says, the stock market is a popularity contest in the short term. Tech has been very ‘popular’ and the current high valuations reflect that popularity. If history is anything to go by, that won’t continue forever. History tells us that the market will “correct” and valuations will be re-weighted according to fundamentals – which is effectively what happened in the early 2000’s.

Use a combination of growth and value index strategies

The best way to protect your investments from the risk of a market valuation correction is to use a combination of index (passive) strategies. Traditional market cap indexing is more akin to a growth strategy and as such, has performed well over the past 5 to 10 years. Alternative strategies such as fundamental indexing and dimensional are value strategies and have under-performed recently – see this blog for more about these strategies).

The best thing to do is use a combination of strategies. However, research demonstrates that most investors are typically too late to make this change and miss a lot of the returns. That is, greedy investors won’t want to switch into a lower returning strategy (i.e. value) now. Instead, they keep investing in growth stocks until the correction occurs. But that will be too late, and they will miss a lot of the potential returns. The chart below (from this study) illustrates that the dollar weighted return is circa 2% p.a. below a buy and hold strategy (this chart also highlights that growth underperforms against value).

The challenge for successful investors has always been to resist what is popular and instead do what is sensible. You can’t expect to jump on the most popular approach year after year and produce quality returns in the long run (this is called “trend chasing”). It just doesn’t work. Bitcoin is a good example of this.

Share investors must consider adopting a greater tilt towards a value approach now, even though recent historical performance doesn’t support such a change.

Why I reject potential clients… and some important lessons

Why I reject potential clients… and some important lessons