Where are interest rates heading and what should you do?

For many Australian’s, their home loan is their largest expense. And property investors should seek to minimise their borrowing costs (interest) as it’s one of the top three factors that directly impacts investment success as outlined in this blog. With this in mind, I thought it was timely to look at the current opportunities in the mortgage/interest rate market.

What the “market” is expecting

As the chart below illustrates, the implied yield on 30-day cash rate futures suggests that the market expects the cash rate to be 0.25% lower in the second half of 2019. These future contracts are used primarily by large institutions and banks and essentially represent the consensus view on the direction of interest rates in the short term (i.e. next 18 months). Of course, the market is not always right – it’s only one indicator. 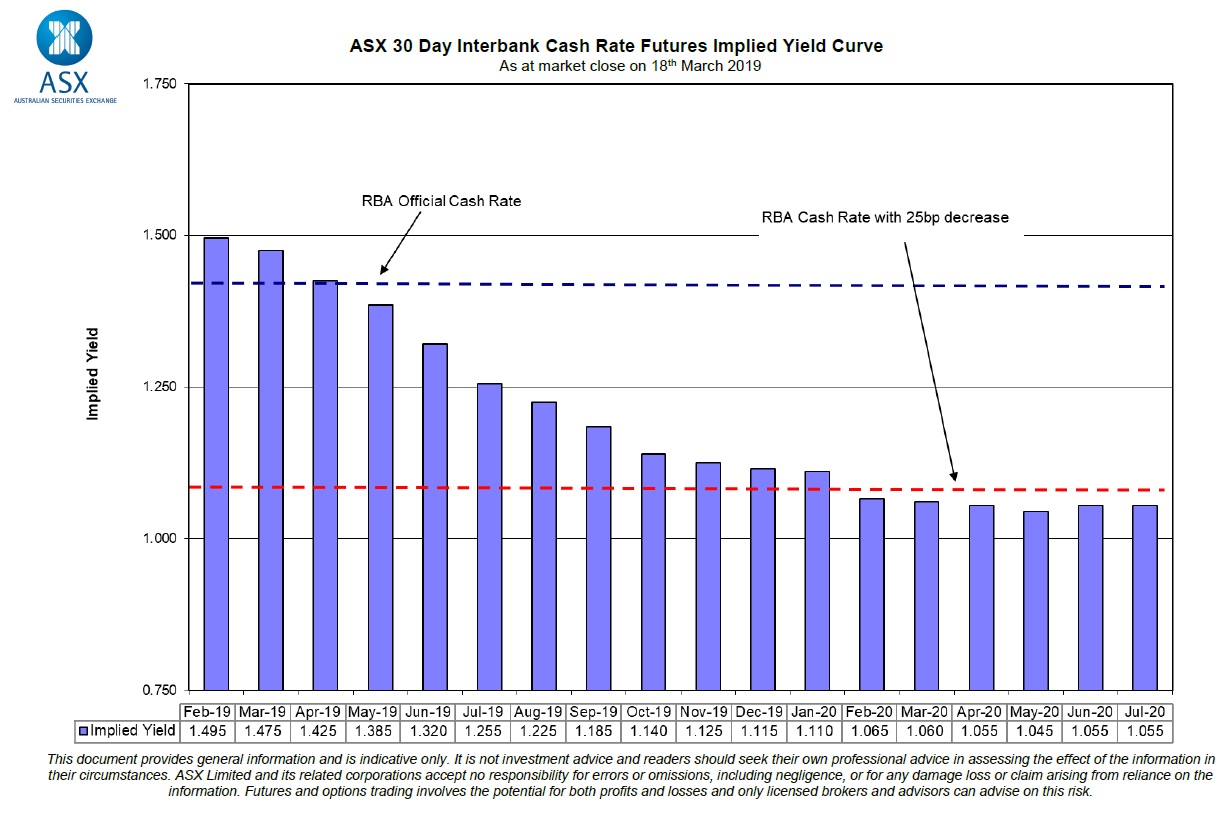 Bill Evans, the Chief Economist for Westpac, was the first to predict that the RBA will cut its cash rate twice in 2019 (0.25% in August and then again in November). Since making this prediction on 20 February 2019, many other economists have joined him. Mr Evans was the first economist to correctly predict the start of the RBA’s easing cycle in 2011 – so he has good form.

Mr Evans cited weaker than expected GDP growth, the “wealth effect”[1] associated with a softer property market and an expected increase in our savings rate as the main reasons for forming his view.

What would have to happen for the RBA to cut

The RBA has previously said on a number of occasions that it is not concerned by the falling house prices. This commentary has never made sense to me because a falling property market definitely impacts on consumer confidence – look at what happened in the USA when the GCF hit. Perhaps the RBA was hoping its positive rhetoric would persuade Australian’s to ignore the wealth effect. However, in the last few weeks the RBA has changed its tune and acknowledge the risk that a soft property market might have on the wider economy.

Also, the RBA has downgraded its GDP growth forecast. I think the RBA would need to see an increase in the unemployment rate before it would be willing to cut the cash rate. Australia’s unemployment rate is still relatively low at 5.1% as illustrated in the chart below. 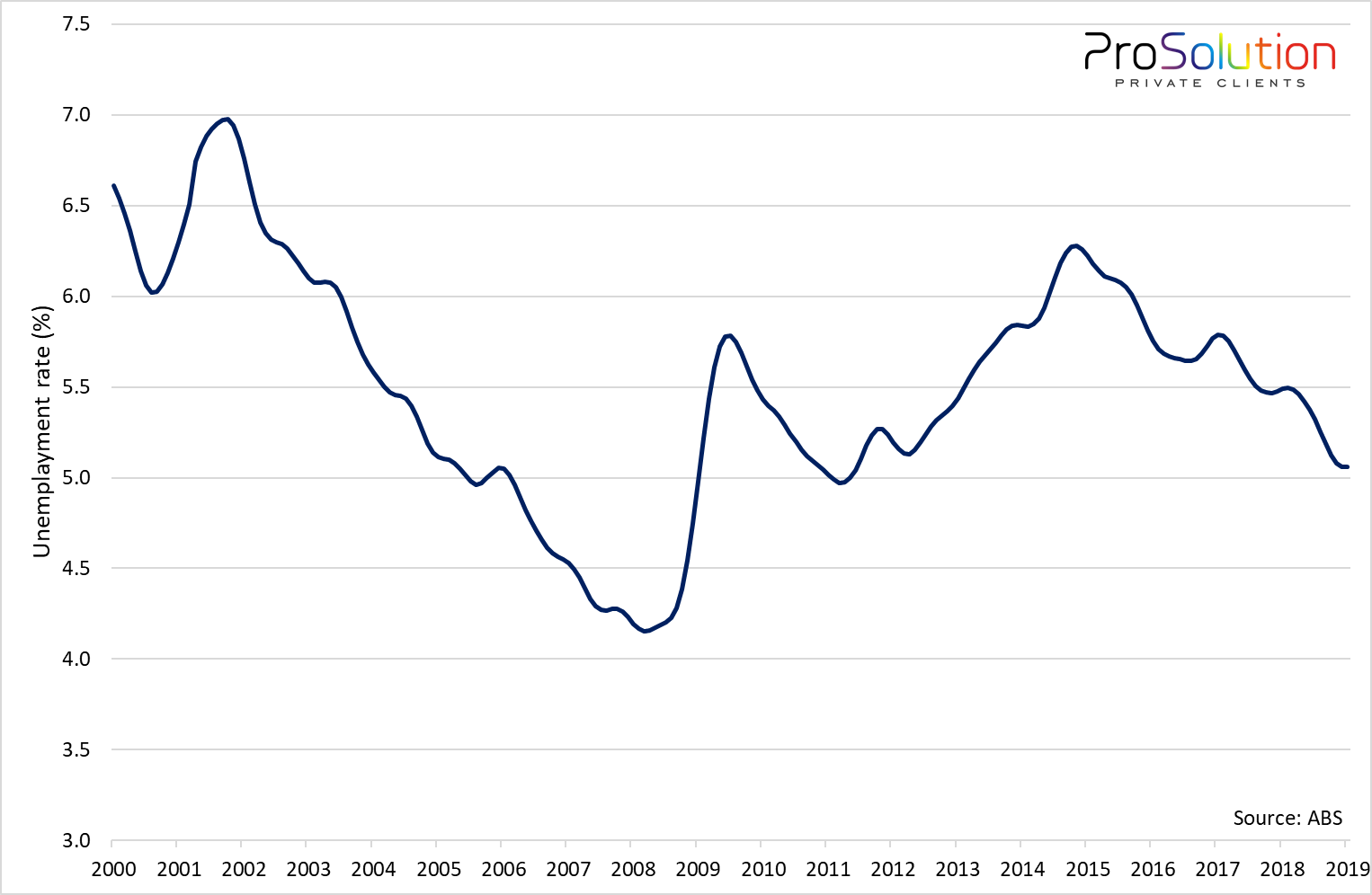 Will the banks pass it on?

Of course, if the RBA does cut the cash rate below its current level of 1.5% p.a., the big question is; will the banks pass all of the reduction onto borrowers?

On one hand, given the scrutiny and negative publicity generated by the recent Royal Commission, you would think they would have to be very brave (read stupid or arrogant) to not pass it all on.

That said, a few small lenders have increased variable rates this year (e.g. ING) which suggest funding costs have been on the rise. Perhaps the banks will use this opportunity to improve their profits?

I think most Australians would be less than confident that the banks will pass on the full rate cut.

The likelihood of these rates being materially lower by year end is relatively low in my opinion. It all hinges on the unemployment rate, GDP growth, the RBA and what the banks do – many things need to happen before we see lower variable mortgage rates.

However, importantly there is no evidence to suggest that the RBA will hike rates in the short to medium term. It looks like variable interest rates will remain at historical lows for some time to come.

In context of the above commentary, 3-year fixed rates appear to represent good value. Owner-occupier 3-year fixed rates are in the range of 3.64% and 3.85% p.a. If you don’t have a high variable rate discount (i.e. higher than 1.50%), switching some of your loan onto a fixed rate might be a good option.

3 years is the most popular fixed rate term for good reason.

When not to fix your rate

Here are 4 reasons you wouldn’t fix your interest rate:

It looks like interest rates won’t be on the rise anytime soon. In fact, they might remain at historical lows for a few more years.

It is possible that the RBA will cut rates, but we’d need the banks to pass it on to benefit from this – and based on past form, there’s a good chance that won’t happen.

Taking this into account, we think 3-year rates look attractive at the moment.

If you need any help with your interest rate management strategy, loan structure, lender selection or the like, don’t hesitate to reach out to us.

[1] The wealth effect suggests that if your experience a fall in personal wealth (e.g. falling house value) you will react by reducing spending and saving more. As such, this impairs GDP growth.

Who’s going to manage your family’s finances when you’re gone?

Who’s going to manage your family’s finances when you’re gone?