Property Market Predictions: what will the market do from here?

The media loves to talk about the property market; will prices rise or fall over the next year? It’s really not that important. “Timing” the market is virtually valueless, as I concluded in this analysis last year. That said, I understand the psychology behind it. People want to buy at the bottom of the market, just before it takes off and only experience the upside.

There has been a lot of commentary recently about improvements in auction clearance rates, uptick in lending volume in July and so on. So, I thought I’d weigh into the commentary and share my views.

Let me begin this blog with some shameless self-promotion! In December 2018, I wrote a piece for The Australian in which I said “I believe that price growth next year will be neutral or positive”. At the time, I was only one of two people in Australia to make this public prediction (AMP Capital’s chief economist, Shane Oliver was the other).

As the chart provided by CoreLogic below illustrates, national auction clearance rates reached their lowest point in December 2018 at around 40%. Over the past nine months they recovered dramatically to be circa 70% (and mid-to high 70%’s in Melbourne and Sydney).

According to CoreLogic, national capital city house prices grew by 1% in the quarter ending August 2019, with Melbourne and Sydney leading the way at close to 2%. Therefore, it looks like the bottom of the market was in fact December 2018 when I wrote my article.

All happening with very low volumes

Property market sentiment began improving after 10pm on 18 May when the Coalition won the election. We definitely witnessed a temporary improvement in our business in terms of enquiry levels from both investors and homeowners.

This is also evident in the chart below which begins on 11 May, the week before the federal election. It sets out Melbourne’s auction clearance rate and the volume of property sold in dollar terms (data from Domain). I have selected Melbourne as auctions are more commonplace compared to other capital cities (so data is more representative).

Please take note of the very low volumes. Up until mid-July only $175 million of property was being sold each weekend, on average. It has increased to $350 million over the past two weeks. But this is still well below the peak of a booming spring market in which over $1 billion of property would sell over one weekend in Melbourne. 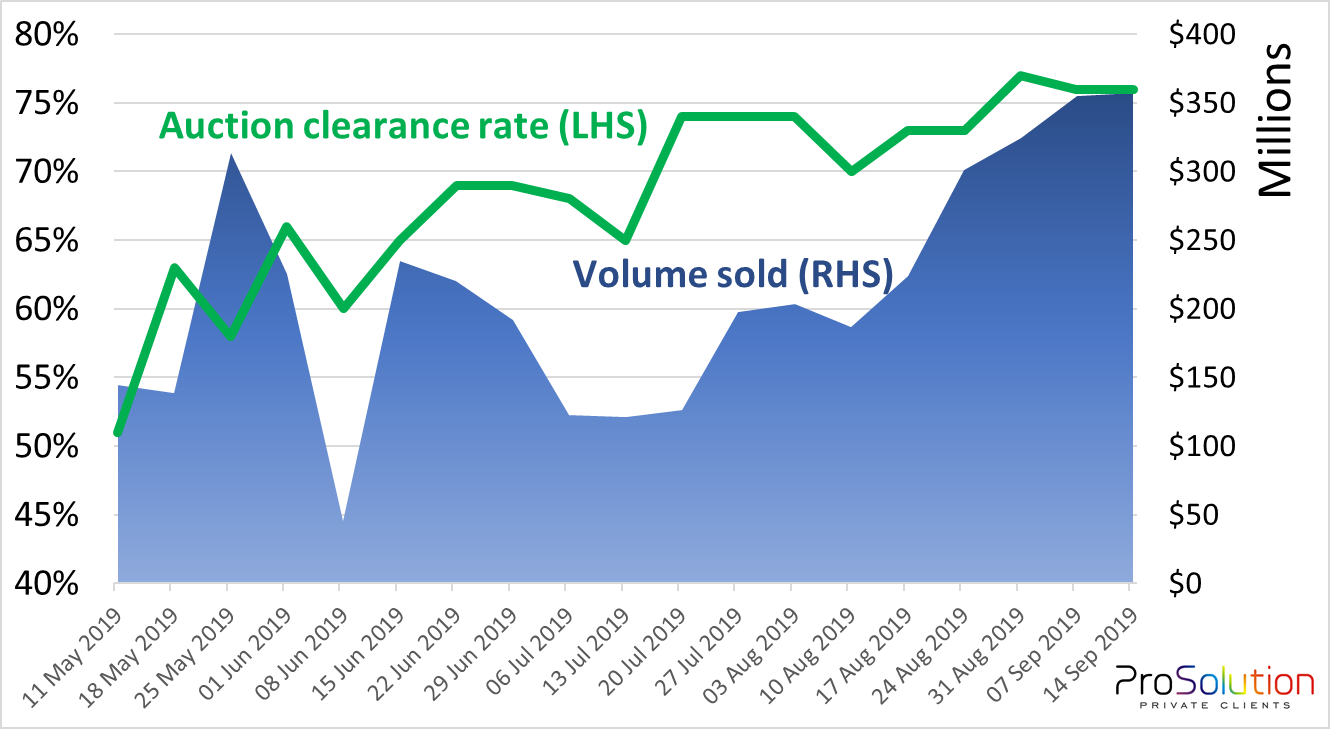 Property market activity (volume) is well down both in terms of the number of properties selling but even more so in dollar terms, which suggests the higher end of the market is very thin. Therefore, whilst an improvement in clearance rates is a positive signal, we need more vendors to put their properties on the market. Until that happens, it’s difficult to ascertain what is driving clearance rates higher. Is it very low volumes or an actual improvement in sentiment? I suspect both are relatively equal contributors at the moment.

Don’t get over-excited by lending volumes

The media jumped all over the improvement in lending volumes (as announced by the ABS) last week. In case you missed it, the value of new loans increased by around 5% in July 2019. Some commentators interpreted this as a signal that lending has loosened a little. It’s hasn’t!

For a loan to settle in July, the application must have been lodged in at least June, but probably before that given how arduous the application process has become. Credit was slightly tighter in May/June than it is now. It will be interesting to see what loan volume are like in August and subsequent months, but I suspect that won’t show dramatic increases. Borrowing capacity has improved but it’s still very difficult to convince a credit manager to approve an application. I suspect the improvement in July is merely a reflection of the temporary positive effect the election had.

The government (ASIC) took Westpac to court last year alleging that it had breached responsible lending laws on up to 262,000 home loan approvals. Westpac used a benchmark measure called Household Expenditure Measure (HEM) as a proxy for an applicant’s living expenses instead of making its own investigations, like it does today. ASIC lost this case in August 2019. The Court said that Westpac didn’t beach the law and using HEM was okay. Last week, ASIC filed an appeal against this decision.

This case is very important. If the appeal is unsuccessful, it will give the banks some confidence that they can lighten up their forensic investigation into an applicant’s expenditure (and yet still comply with the law). However, if the appeal is successful, I don’t think credit will loosen up at all anytime soon.

The prospect of some very onerous taxation changes by the ALP together with dramatic tightening in credit policy certainly spooked the property market. Of course, the tax changes are now off the table and I think we have all made friends with the new lending environment. On the whole, people are more optimistic and confident with the property market.

The biggest drag on future buyer demand will be access to credit (loans). I suspect more vendors will choose to sell their properties next year, especially with the backdrop of improved prices. Credit might gradually loosen (if ASIC isn’t successful with its appeal), but I doubt any bank will make substantial wholesale changes, as they won’t want to attract this sort of publicity. As such, I think credit will very gradually loosen over the next 12 to 24 months. This should lead to positive housing price appreciation, but a runaway market is less likely. Therefore, as a generalisation, I think capital city property markets might see price increases of in the range of 5% and 10% over the next 12 or so months.

Based on the information known today, I certainly don’t expect that property prices will depreciate any further.

Of course, the national property market is made up of literally thousands of different, smaller sub-markets. These sub-markets are all influenced by their own geographical and micro-economic factors. As such, the macro-economic factors discussed above will have varying degrees of influence. It is important to take this into account when considering your own property plans.

Finally, and most importantly, as discussed at the beginning, whilst this topic might make interesting discussion, its application is limited. I believe that there’s never a bad time to buy in an investment-grade property, if it’s appropriate for your circumstances.

Investing in shares 101: A beginner’s guide

Investing in shares 101: A beginner’s guide